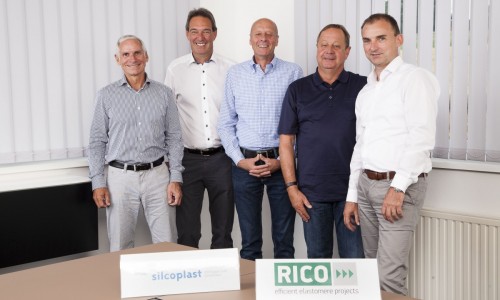 With two companies working together since quite some time, more synergies can be a result of such a cooperation. This was the case between Rico and Silcoplast AG in Wolfhalden, Switzerland. A restructuration of the Swiss company and Rico looking for a partner to produce small amounts or small parts and with cleanroom capabilities – the possible synergies were so extraordinary that Rico now has a holding with Silcoplast.

The portfolios of both companies are complementing, whereas Silcoplast is specialized mainly in the production of small series of molded parts, mostly for medical technology (i.e. ophthalmic surgery, hearing instruments etc.), Rico offers the construction of fully-automated and sophisticated molds and is able to produce large series on their injection molding machines.

Rico had plans for an own cleanroom. This cost intensive construction was not to be realized before checking out other alternatives in detail. And there were the news from Wolfhalden just at the right time, saying that Silcoplast general manager Wolfgang Wagner wants to change the ownership structure of his company.

In Switzerland a cleanroom already existed so a full partnership became an interesting alternative. After a detailed check of all the necessary documents and important infrastructure, the associates of Rico decided to join in at Silcoplast. Contracts have been signed already this summer.

Advantages for the customers of both companies

The production of small series molds and smaller numbers is located at Silcoplast, as well as the part production in the cleanroom. Larger molds and series are manufactured at Rico. Silcoplast is certified according to ISO13485 for the production of medical technology products. This means that serial products which need this certification for being processed can be made in Wolfhalden on Rico molds. But if Wolfhalden gets a large series order, too big for the equipment there, it will be molded at Rico in Thalheim.

The customers only have advantages resulting out of this synergy. They can rely on the entire value chain of two experienced elastomere manufacturers, who are in the position to produce with basic and sophisticated molds small and large series up to a fully-automated project setup. And all this with the best quality ever.